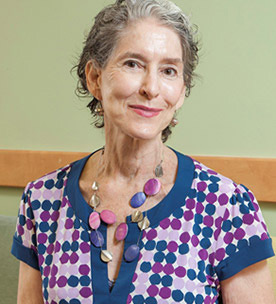 Margaret, a ballet dancer and dance critic for over 35 years, started battling her Stage III-B colon cancer with chemotherapy in January of 2007. However, by July 2008, her cancer had progressed to Stage IV, and she was on and off chemotherapy for several years. She first became acquainted with Mary Crowley Cancer Research in 2010 when she started her first clinical trial.

By May 2011, her abdominal tumor had grown to a weight of almost 20 pounds and was removed by Dr. Joseph Kuhn, whom she greatly admired. Margaret says she did well for three years until her cancer advanced to her liver and lungs, requiring yet another surgery by Dr. Kuhn and more chemotherapy in July 2014.

Margaret enrolled on several clinical trials at Mary Crowley during which achieved stable disease, which means her cancer had stopped growing.  With a son, daughter, and three grandchildren to love, that was music to the ears of an eight-year cancer survivor at age 74!

Margaret passed away on May 22, 2019 after a 13-year battle with colon cancer. Mary Crowley is proud to have had a part in extending her time and helping her achieve a good quality of life while she was on trial with us.