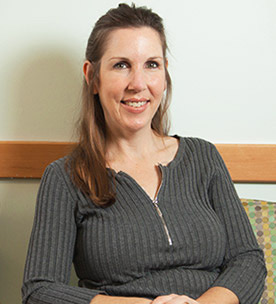 In May 2012, Jill had just quit working and was looking forward to raising her two young children. She and her husband Chris had just purchased a large plot of land in Rockwall, Texas.  Chris grew up on a farm in South Dakota and loved blueberries, and Jill loved the outdoors.  Together they decided to develop their land into a blueberry farm during the spring and summer months and a pumpkin patch during the fall.  Jill would teach school groups how to care for blueberry bushes, and families would come in May and June to pick their own berries.  During the fall, the pumpkin patch would sell hundreds of pumpkins and offer a petting zoo, picnic grounds and hayrides.  The Blase Family Farm was in business!

In June 2012, Jill found a lump in her breast and scheduled an appointment with her doctor.  The doctor thought it was probably just a cyst but knew Jill’s family history of cancer, so she requested a 3D mammogram.  Thinking it was just a cyst, Jill went alone to her mammogram appointment but understood immediately that the results were not good as she watched the technician read the diagnostic images.  The doctor later confirmed that Jill had triple negative breast cancer.  Jill was in shock.  She will never forget the wonderful comfort that a Nurse Navigator, now her good friend, gave her when she came in and said, “Everything is going to be okay.”

Jill underwent a double mastectomy and chemotherapy, even though the cancer seemed to be contained.  She had reconstructive surgery in January 2013 and was given a good bill of health.  In June 2014, however, Jill’s two-year checkup revealed three small lesions in her lungs and one in the lymph node.  Since the cancer had originated from the breast, it was classified as metastatic triple negative breast cancer; patients with this type of cancer are usually told they have 18 months to live.  Jill enrolled in a clinical trial in Tennessee for a targeted chemotherapy, but after eight months the trial closed, as patients were not responding successfully.  Jill began researching on her own and became very interested in immunotherapy.  At Jill’s request, her oncologist found a trial at Mary Crowley Cancer Research.  In May 2015, Jill enrolled in a combination PD-L1 immunotherapy clinical trial during which she acheived stable disease.  Jill completed the trial in May 2016 and remains stable!  Thanks to Mary Crowley, Jill and her family have HOPE for a “fruitful” future!

“I am incredibly grateful to have the opportunity to be a part of Mary Crowley’s immunotherapy clinical trial. The doctors, PAs, and nurses are extraordinary people. The kindness and caring they show patients is heartwarming. I am thankful to experience no side effects and I feel great.  I have hope for my future every day, thanks to this treatment.”  –Jill Blase

The Blase Family Farm continues to be a popular destination for school groups and families. Jill and Chris welcome visitors! Go to www.blasefamilyfarm.com for more information